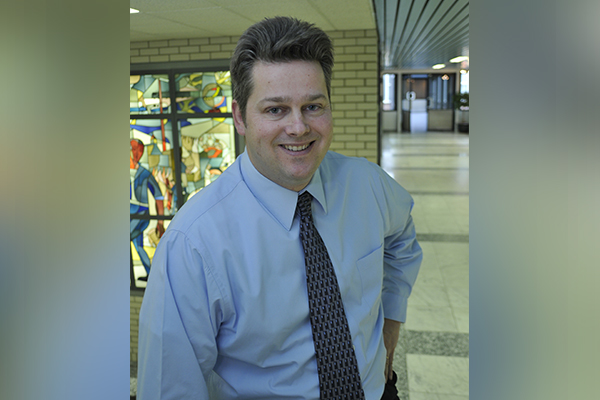 “We have 40 trained employees that perform the Human Nose Score test at the slaughter lines in the Netherlands.”

Ronald Klont is 53 years old and director Research and Development at the Vion Food Group since 2008. Vion Food Group is an internationally operating Dutch company with slaughterhouses and meat processing companies for pork and beef.

How did you get into the meat business?
I graduated at Wageningen University in animal sciences. My PhD thesis about the influence of pre slaughter stress on pork quality was defended at the University of Utrecht. During my PhD study, I did part of my research at INRA in Clermont-Ferrand, France. Throughout my whole career during 25 years, I have always been active in research into meat quality, working for research institutes, genetic breeding companies as well as for meat processing companies. Identifying directions for solutions against boar taint did always receive my special interest. At the Pig Improvement Company PIC I was involved in developing genetic solutions using DNA markers to select against boar taint.

When did the production of boars start?
Starting 2008, Dutch retail organisations did clearly focus more and more on animal welfare issues. Ending castration was one of the animal welfare issues that was focussed on. Producing boars became an integral part of the so-called Better Life Label that was introduced for pork meat in Dutch supermarket stores. Within this label Vion slaughters more than a million pigs annually.

How is boar taint prevented at Vion?
For reasons of quality assurance, Vion applies the so-called Human Nose Scoring (HNS) method at their three slaughter plan locations in the Netherlands. HNS functions as a safety net to prevent consumers being confronted with boar tainted meat. Currently, we have 40 trained employees that perform the Human Nose Score test at the slaughter lines in the Netherlands. To become a member of our HNS program, the employee has to be sensitive to both Androstonone and Skatole. The next step is that we do train them on giving scores to carcasses, ranging from 0 to 4, whereby 0 is no boar taint, 1 is slightly deviant smell, 2 is deviant smell, 3 is slightly boar tainted, and 4 is definitely boar tainted. We do exclude carcasses graded 3 and 4 from the fresh meat market. The score is allocated to the carcass at the slaughter line.

How do they check for boar taint?
We do heat the neck fat of the carcass and the employee smells assigns a score per individual carcass. A tester may smell for half an hour, then he has a half-hour break from smelling. At the moment our average boar taint prevalence is 3%. We do continuously monitor the accuracy of the individual assessor. By providing them feedback on their scoring results, we can immediately observe if the assessor starts to deviate in his scoring figures.

Can Vion guarantee zero boar taint to market and retailers?
Our key clients – including retail organisations – have from the beginning received information about our detection protocol. That is necessary for building trust in the market. We cannot guarantee a zero risk situation. But no company can guarantee this, as long as also carcasses from gilts can contain Skatole. My own experience is that producing and marketing boars is a about more than boar taint. Especially the leanness of boar carcasses is an important issue. Boar carcasses have more unsaturated fat. That may cause problems for some products on specific markets. For example for dry cured ham, we do need fatter animals. We do induce farmers to produce fatter animals by changing the payment scheme. Therefore we introduced a price reduction for animals with less than 10mm fat.