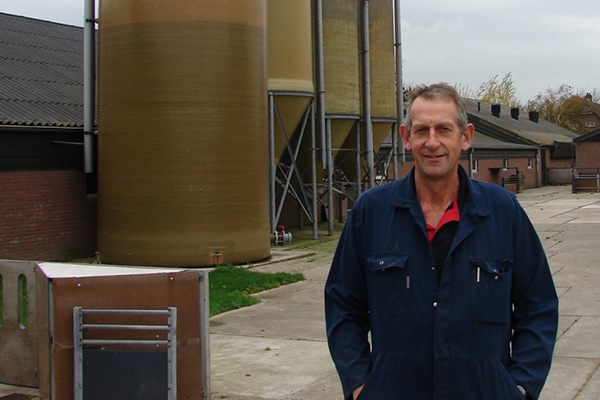 “It is important that the pigs have good mobility”

Jaap Kreuger is 64 years old and lives in Woerden, west of the Dutch city of Utrecht. Together with his son he owns a 500 sow operation and 1,100 fattening pigs. Genetics is a rotation (Norwegian Landrace, Great York and Dutch Landrace) with a Tempo terminal.

How did you get into pig farming?
I’ve worked with pigs all my life. My father was a pig farmer and I worked on several pig farms myself. In 1993 I established my own farm in Woerden. In the future my son will take over the farm. For me pig farming is still a lot of fun and I’m actually quite proud of it.

When did you start keeping boars?
We have switched over to boars in 2010, simultaneously with the switch to the so called Better Life Label 1 star. This is a quality mark for improving animal welfare in pig farming.

What was the reason to switch?
In the past, you could only supply boars if they were delivered at a lower weight, which is economically unattractive. And then you also had the problem that the gilts were heavier than the light boars. So that did not work. Then in 2010, at a certain point, there was a good arrangement within the Star Program of Vion food, and it was fairly easy for us to switch.

What are the advantages and disadvantages of keeping boars?
What I find a great advantage is that it is less work. And castration is not fun either. There will be an effect on the feed conversion rate and the meat percentage. But I cannot say precisely how much, because I do not have a comparison. After all, other things vary as well. What is a side note is that more meat also means less bacon, and that is becoming a disadvantage.

How often does aggressive behavior occur among the boars?
Aggressive behavior is not too bad. We do have to deal with mounting behavior. Every once in a while you have a pig that keeps going. If there is a pig in the group with a bad leg, then there is a risk that it gets scratched.

How can you counter these behaviors?
It is important that the pigs have good mobility and that we have uniform groups. Then the risk of mounting is much less. And if one of the pigs is really excessive, you take it out and put it aside.

What has changed in the stables for keeping boars?
Nothing has changed at our farm, except that we have gone from 0.8 to 1.0 square meters. According to us, that only offers benefits: more space and health. And do not forget that the animals are still getting heavier, from 90 kg to 95 kg.

What do you think is the ideal accommodation for keeping boars?
I think the group size should not be too big. Then the risks are smaller, especially if you also have uniform groups. We work with wet feed, but cannot compare whether it would be better with a different feeding system.

How do you look back on your decision to keep boars?
As said before, it was easy for us to switch. We cannot accurately indicate the benefits of better feed utilization. The meat percentage has also increased. But I think that we have arrived at the lower limit for the fat thickness. This may need to be adjusted here. In addition, it is important that the abattoir accurately performs the detection for boar taint.