As of today all terminal boars by Nucléus – PIETRAIN and VIGOR – are INO certified. This means: without risk of odour transmission. The INO label is based on the prediction of androstenone levels using a blood test performed at 150 days of age on all candidates for reproduction. Only animals with a sufficiently low androstenone level are selected for breeding. Nucléus is a subsidiary of COOPERL. For several years, the rate of boar tainted carcasses in Cooperl slaughterhouses has been decreasing. From 2017 onwards, after the introduction of the first INO boars, this decrease accelerated, as shown in the graph.

With the ending of castration and in response to the problem of odorous carcasses, Nucléus implemented the INO label for its Pietrains and VIGOR boars. Thus, since April 2016, INO-labelled boars have been present in the CIA Nucléus stock. Today, almost all of these boars are INO certified. For more information, visit the Nucléus website.

Boar taint prevalence has been reduced from approximately 3% to 1% in the last five years. This is a conclusion of a study on the Dutch pork supply chain that falls under the ‘Better Life’ label. 2.579 million entire male slaughter pigs were analysed from january 2015 to september 2019. The table below shows the progress during this period.

The results
In the study boar taint prevalence was determined with the inline humane nose score system. Average slaughter weight of boars over the period of 245 weeks was equal to 94,8 kg (and 95.95 kg the last year). The meat percentage was equal to 59,8%. The pig price payment scheme remained unchanged during this period.

The study shows that breeding against boar taint prevalence is successful. Breeding efforts help accomplish a supply chain in which castration of male pigs becomes superfluous. Read more about breeding efforts on our topic page on breeding. 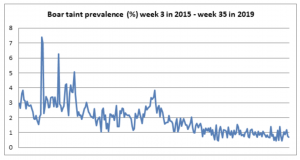 Recombinetics/Acceligen and Hendrix Genetics have announced that they successfully used a genome editing method for pigs that remain in a pre-pubertal state, thus eliminating the need for surgical castration. The first litter of castration-free piglets using commercially relevant genetics confirms the methodology is working.

In 2017 the Foundation for Food and Agriculture Research (FFAR) awarded a grant to Recombinetics, Inc. to end surgical swine castration. Since then, they formed the “Alliance to End Surgical Castration of Swine.” This venture developed an approach that prevents sexual maturation in swine without introducing any foreign material into the genes of pigs.

It is a huge breakthrough in ending castration of male pigs, as this is the first effort to prevent the castration on a genetic level. Visit the website off the FFAR to read more about this effort.

Dissertation on marketing meat from boars

Against the background of the European declaration to voluntarily stopping castration by January 1, 2018, DG Santé of the European Commission has commissioned a study to examine the state of play in the various European countries. The survey was executed by the CASTRUM Consortium. The study focused in particular on the methods for anesthesia and/or prolonged analgesia and on alternatives to surgical castration for heavier pigs used for special traditional pork products. The CASTRUM study shows large differences in practice in European countries. In most countries, pigs are still castrated without anesthesia and the differences are great when it comes to the use of different anesthesia methods and tools. CASTRUM examined the effect of castration on the production of special traditional products. They often are produced from older and heavier pigs with an increasing risk on boar taint. The CASTRUM consortium conducted the research in the following 16 countries. Southern Europe: Portugal, Spain and Italy Western Europe: France, UK, Belgium, Germany and Austria Northern Europe: Denmark, Norway, Sweden Eastern Europe: Poland, Hungary, Slovenia, Croatia and Bulgaria In addition, information was collected from other countries such as Finland, Luxembourg, Malta, the Netherlands and Switzerland.

Quality of boars, barrows and gilts

Preventive measures like feeding, breeding and housing are effective in reducing boar taint Fleischwirtschaft Inernational 6/2016 By Dr.ir. Gé Backus, project coordinator for the Wageningen UR research on piglet castration and also chairman of the European Expert Group on piglet castration. Quality assurance and quality improvement are important to maintain market share or achieve higher prices. It is expected that the relative importance of quality will only continue to increase in the future. Pork quality may refer to slaughter quality, quality of meat and on hygienic quality. Slaughter quality is about meat percentage, carcass type and ratio of meat/fat and meat/bone. Meat quality is about sensory quality (color, water binding capacity) and eating quality (tenderness, juiciness, taste and smell).

The Swiss FSVO (Federal Food Safety and Veterinary Office) investigated amongst members of the EuroFAWC (European Forum for Animal Welfare) the state of affairs concerning the castration of pigs. Since 1 January 2009, the castration of male piglets in Switzerland can only be carried out under anesthesia. Swiss pig breeders have at their disposal today three practicable methods for preventing boar taint in pork: surgical castration under general anesthesia, vaccination against boar taint and boar fattening. After more than seven years experience, the Swiss are evaluating and comparing the three different methods during a workshop on Friday, November 25th, 2016.

Research data  and the status in the EuroFAWC members countries.

The thesis contains a.o. the following interesting information.
History about pig castrations: One part of the thesis contradicts the widespread opinion which maintains that pig castration has always been used to prevent off-odors. A closer look at the history and genesis of castration provides a better understanding of past needs and demonstrates that these differ from the needs and practices of current livestock systems.

Practical implications for a sensory quality control system of boar taint: What needs to be done to set a quality control, is summarized in an easy to understand graphic.

The concerns about pig castration have led to changes in European law and will most certainly have lasting effects on the production chain.
As a result, such invasive procedures have come under increased scrutiny. Animal welfare considerations aside, scientifically there is no doubt about pain during castration without anesthesia. Moreover, the castration procedure itself is a time-consuming task for the farmer. The last argument is productivity: from an economic and food supply perspective, castrated pigs are actually less productive than boars and produce a lower percentage of lean meat. These facts shed light on why there is a growing interest in the fattening of entire males. The occurrence of an off-odor in the fatty tissue of boars continues to hinder the widespread raising entire boars. Depending on its severity, the so-called boar taint is an unpleasant olfactory perception which can be recognized when heating pork. Current literature and reports often reveal a discrepancy in the number of tainted carcasses reported in scientific literature and abattoir data.

Knowledge is lacking on how to implement a sensory quality control of the so-called boar taint. Even though there are chemical analyses able to detect the major causative compounds, androstenone and skatole, there is no affordable automated technique available at the moment which can simultaneously detect both compounds at the slaughter line. To control the occurrence of boar taint, practical implications for a sensory quality control of boar carcasses are needed. This highlights the need for research in sensory methods which apparently are indispensable for quality control.

The objectives of the present thesis were: 1) to develop methods which allow objectively characterizing the olfactory acuity of human assessors in terms of major boar taint compounds, 2) to assess methodological aspects of a sensory quality control of boar fat in regard to sample preparation and the test environment, 3) to re-assess the relationship between chemical boar taint analysis and sensory evaluation in a large scale study, and 4) to establish a framework for evaluating the performance of sensory quality control.